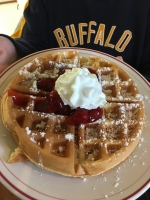 Wednesday, April 22, 2009 At 18:11 Hamlin was toned out for a FAST response to Brockport’s reported barn fire on Monroe-Orleans County Line Road. Engine 243 responded with a crew of 8. Upon arrival command requested 243 set-up a fill site at closest hydrant, several miles back up the road. Lt. Woods split the crew and dropped 5 firefighters as the FAST then took the remaining crew to the hydrant. 243 supplied the tanker relay that consisted of Hamlin’s 246 and tanker-pumpers from Morton and Brockport. The Hamlin FAST crew was soon relieved of this and joined in the overhaul of the fire. The crew of 243 was; Lt. Rick Woods, Officer; Keith Gay, Driver and firefighters Jesse Seeler, Mark Jacobs, John and Tony Deserto, Justin and Mike Stevenson. The crew of 246 was; Joe Burke, driver and firefighter Aaron Lewis. For more information and pictures go to Monroe County Fire Wire

This site has been viewed 264,654 times.
News
Events
Pictures
Apparatus
Maintained by the members and staff of Hamlin Fire Department Inc.. Designated trademarks and brands are the property of their respective owners. Copyright © 2006-2021. YourFirstDue Inc. All Rights Reserved. Content on this web site is supplied by Hamlin Fire Department Inc.. YourFirstDue Inc. cannot be held responsible or liable for any content, text, pictures, or any other media found on this web site.
Management login
Powered by